How does the system work?

Monitors inside South West Water's assets are activated when there are overflows. These measure the duration of overflows - if they meet the agreed significance criteria this triggers an automated alert, which is sent to beach managers, the Environment Agency and Surfers Against Sewage.

How did you chose which beaches would be included?

For the first year, we wanted to feature some of the area's most popular beaches to see how well used the site would be. For that reason, most of the beaches on the site that year were awarded a Blue Flag in 2010. Others were chosen because they are well used by visitors or because they were nominated by our partners, including Surfers Against Sewage. Only beaches where managers and owners have granted permission were included.

In 2012 we used the same criteria to expand the site to include live feeds from 35 beaches.  We now have 61 live feeds.

There are no stormwater overflows at 55 beaches across the South West.

What are the significance triggers?

The specified duration at each bathing water is based upon Environment Agency's assessments of significant flow and has been agreed with key partners including Surfers Against Sewage.

Why are they different at each beach?

They may differ at each bathing water due to the position, length and diameter of the overflows and other local factors such as the affects of tides and how rivers/streams affect the bathing water. It must be remember that BeachLive is designed to give bathers and recreational water users up to the date information regarding bathing water quality and it is not a system to record the performance of a sewer network.

What if a customer sees sewage on/off a beach but no alert has been issued?

A customer should contact South West Water and/or the Environment Agency to report sewage on or off a bathing water. Working together we will seek to establish cause and carry out any clean-up work as necessary. Often there are other factors which impact on bathing waters including urban drainage, agricultural run-off, algae, private sewers and misconnections - homes wrongly connected to surface water drainage instead of public foul sewers.

Should I swim after a storm?

Following heavy rainfall, the Health Protection Agency advises that bathing water quality can be affected by several factors, including agricultural pollution and urban drainage, as well as water companies' infrastructure. Stormwater overflows, which protect homes and gardens from sewer flooding, are also designed to operate at times of heavy rainfall.

What other risks to bathing water quality are there? Why can't you tell us about them, too?

Water quality can be affected by other factors including urban drainage, agricultural run-off, algae, private sewers and misconnections - homes wrongly connected to surface water drainage instead of public foul sewers. Wet weather significantly increases the likelihood of all these factors affecting water quality at the beach. We cannot measure all risks to bathing water quality but we are working with others to minimise the cause. 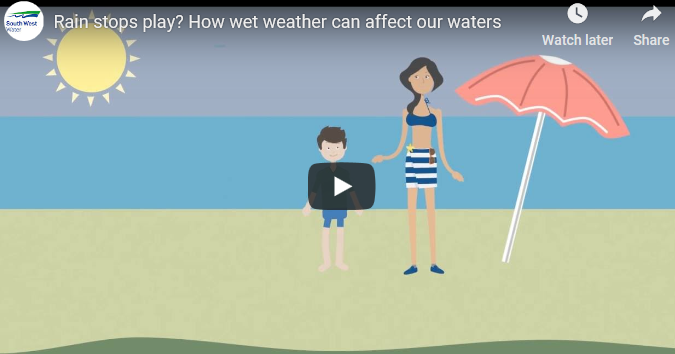